And the TARA Tots Settle In!

And the TARA Tots Settle In!

It has been only been 4 short months since the TARA Tots shelter for vulnerable children aged 3-6 years opened.  When I visited last at the end of January, we had taken in 4 children and they had only been in residence one week.  They were logically a bit wild and unsettled at the time.  Their behaviors ranged from hitting to clinging for dear life, to passing out from mental and physical exhaustion.  They were covered in lice and had worms.  They had all been used to having the run of the slums street (or being locked in a room alone all day) so the concepts of discipline and structure were foreign. In the following months, two more tots were welcomed making a nice round family of 6.  But oh the stresses!  Problems ranged from an unknown staff member stealing food from kitchen, constant nanny turn-over, grumpy neighbors and difficulty getting the tots on a schedule.   To top  it off, two weeks ago, one of the child’s mother came and took her back to the horrific conditions she was rescued from. 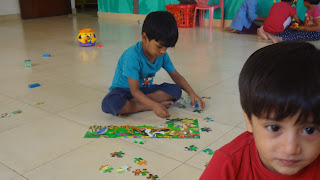 Despite these ups and downs, and only 16 weeks later, I am now surrounded by a very calm, organized and engaged group of Tots!  Their English has flourished, they sit quietly for puzzles and reading, hands are washed before eating and they sing Barney’s “clean up, clean up” when playtime is over.  Amazing!  Once the license for the shelter is finalized (big sigh….things in india DO take time) we will admit more children from the same slum area in central Delhi.  TARA provides long-term residential care for vulnerable children whose parents are unable or willing to care for them.  By end of year we will be able to accomodate 20 at full-capacity.  A life at TARA is an incredible fresh start for these children – a very rare chance at breaking the cycle that has trapped their parents.
In the coming months, GP will be working closely with TARA on the implementation of a customized Measurement Tool in order to begin accurately tracking the impact of the program’s mission.  Visiting every 4-5 months, GP also plays an advisory role assisting in various aspects of program development.
GoPhilanthropic is deeply committed to this program and is looking for individuals or families willing to consider $30-$50 month support for TARA.
Join GP in visiting the children Sept 2012.  See the GP website Travel page for details.
GoPhilanthropic Foundation2019-05-03T20:57:04-06:00