The CRN Transit Home was established in 2016 and provides immediate temporary shelter. After arriving at the home, rescued children receive protection as well as health care, counseling, and non-formal education. We rescued eight children during July 2020-February 2021 and reintegrated four children with their families during this period. At the moment, there are nine boys in the CRN Transit Home and we are following all the safety measures to keep children safe from COVID-19 and accordingly, children are also regularly oriented about the ways to keep themselves safe.

Following is an outline of activities currently taking place at the Transit Home in Nepal.

Health and hygiene play an important role in one’s life and it is very important to carry out detailed medical check-ups for rescued children to ensure they are healthy. In this regard, CRN has provided medical check-ups of all rescued children immediately through its consultant doctor. The children are taken for further medical check-ups in the government hospital. The medical report states that all the children were healthy and not requiring any further treatment. Additionally, children are also oriented about the different ways of keeping themselves safe in the present situation and are following the safety measures even if they are at home. 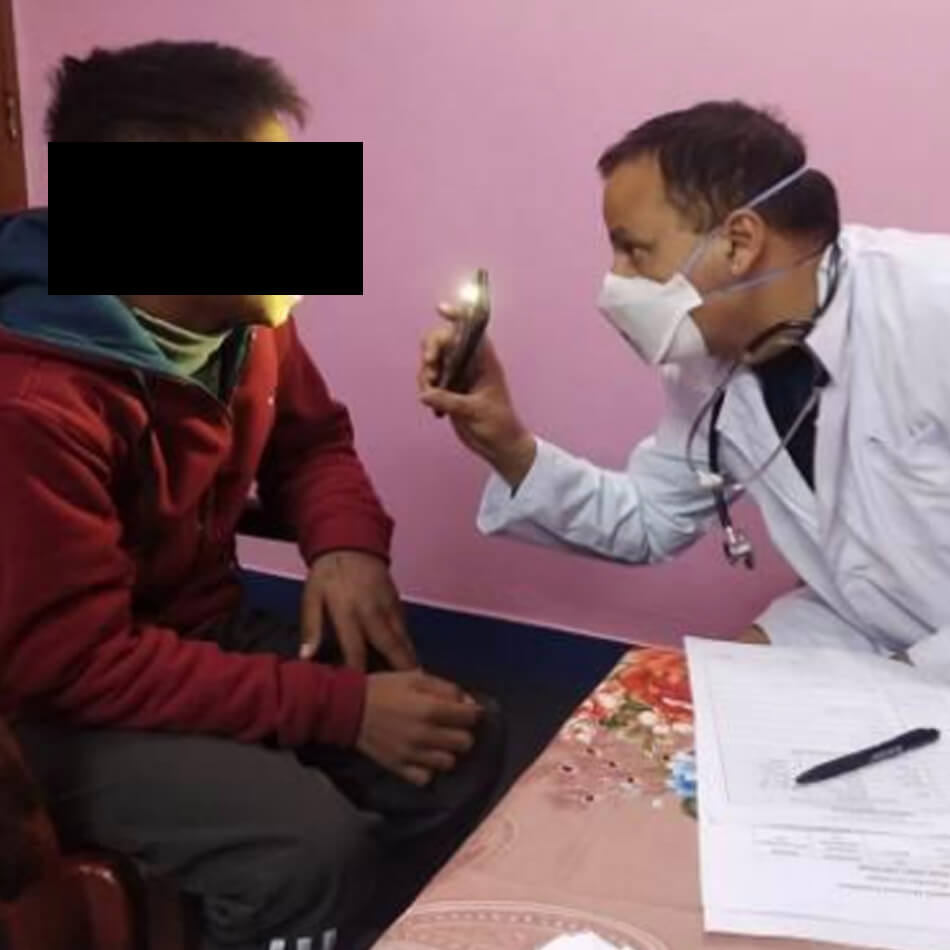 Counseling is a process where, by talking to a professional about how you’re feeling, you can work out, or try to change, the things that cause you distress. To make the rescued child comfortable we use the same dialect (mother tongue) that the children used. In the initial stages, children in the Transit Home were hesitant to open up or to tell their stories. However, after regular counselling support, they start to build trust with us and share their emotions and sorrows. Besides, children are given one-on-one support according to their individual needs. 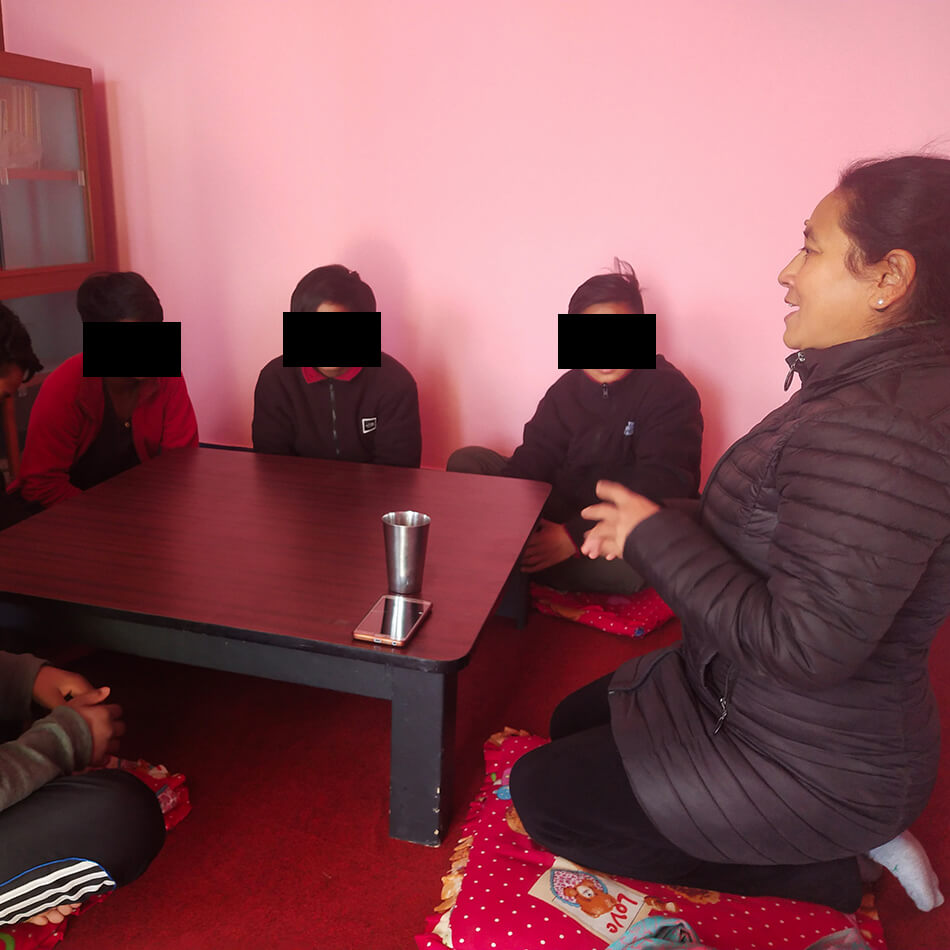 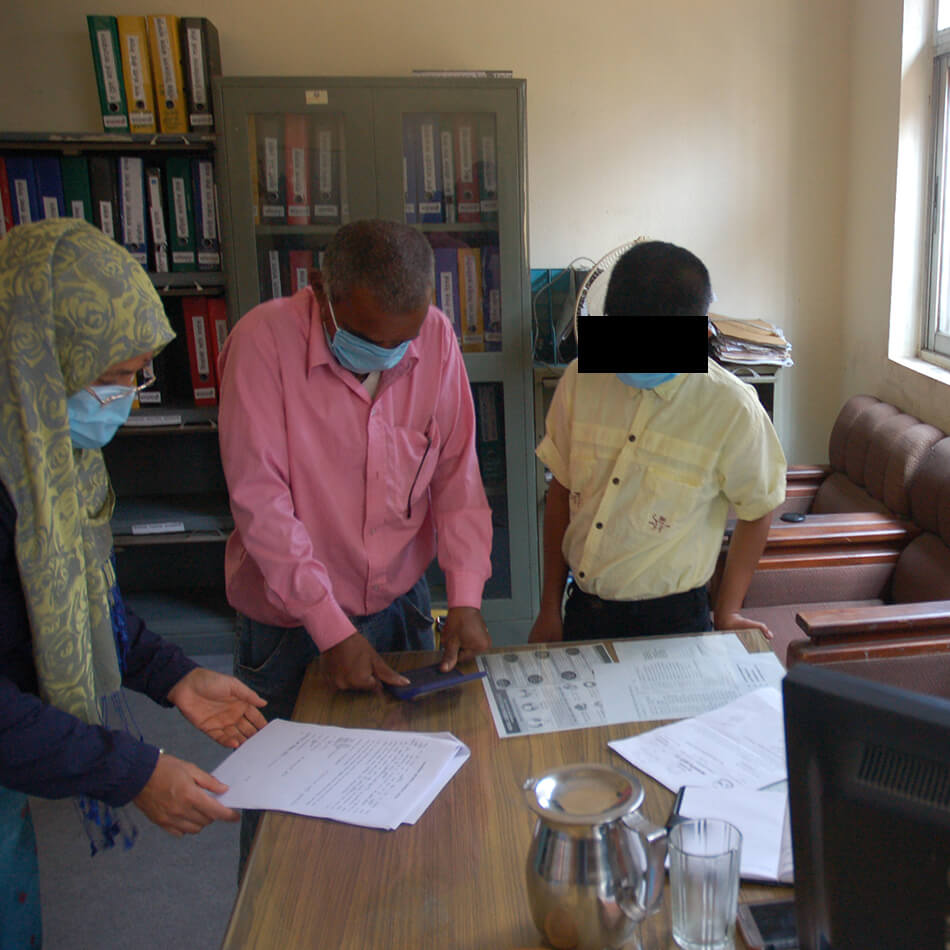 Children in the Transit Home are out of school for various reasons; some have left school for 2-3 years back and some 8-12 months. This has adverse effects on their studies. To address the problem, we provide educational opportunities to all the rescued children. Some rescued children in the Transit Home do not know the alphabet or numbers when they come first at our home. But, with the support of the house parent, they can now read simple storybooks and can write their name. 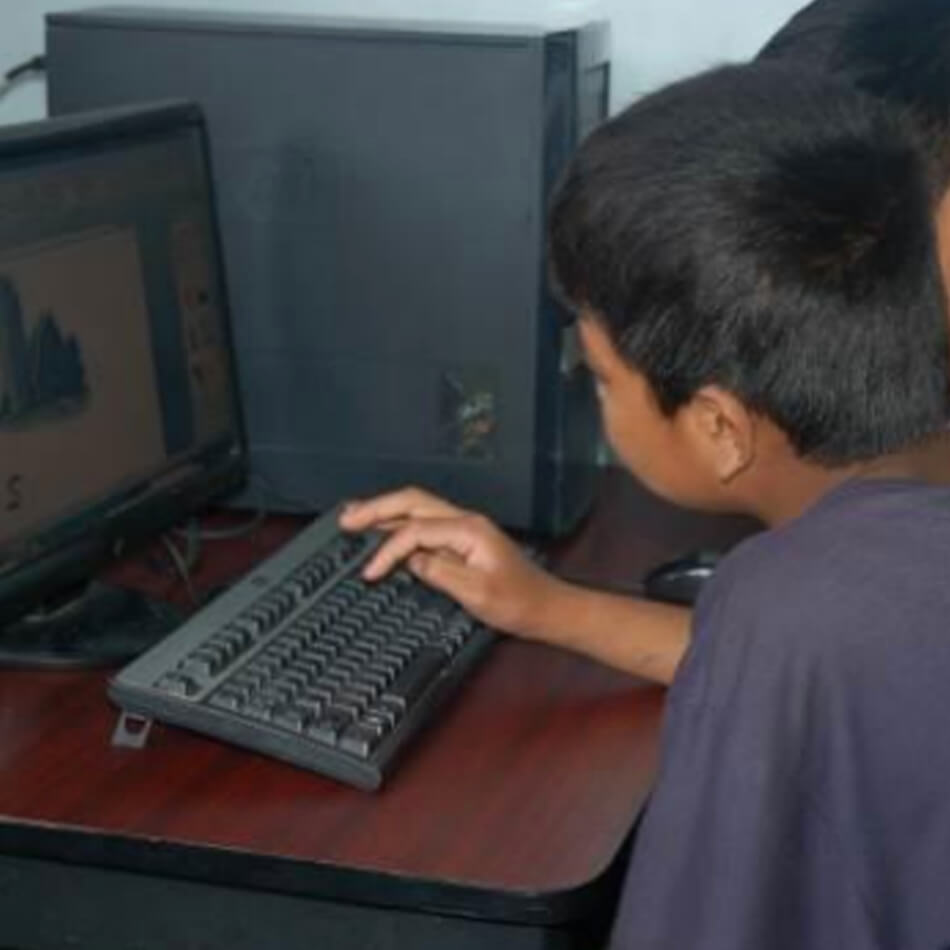 During this period, we were not able to take children outside for recreational activities due to COVID-19. Instead, we organised several indoor activities that helped children to become emotionally strong. Engaging children in art and craft activities, reading storybooks, yoga and meditation found the best healing method during this difficult time. Apart from this, they also played indoor games such as snake and ladder, carom board, puzzle-solving activities, watching television, singing and dancing. 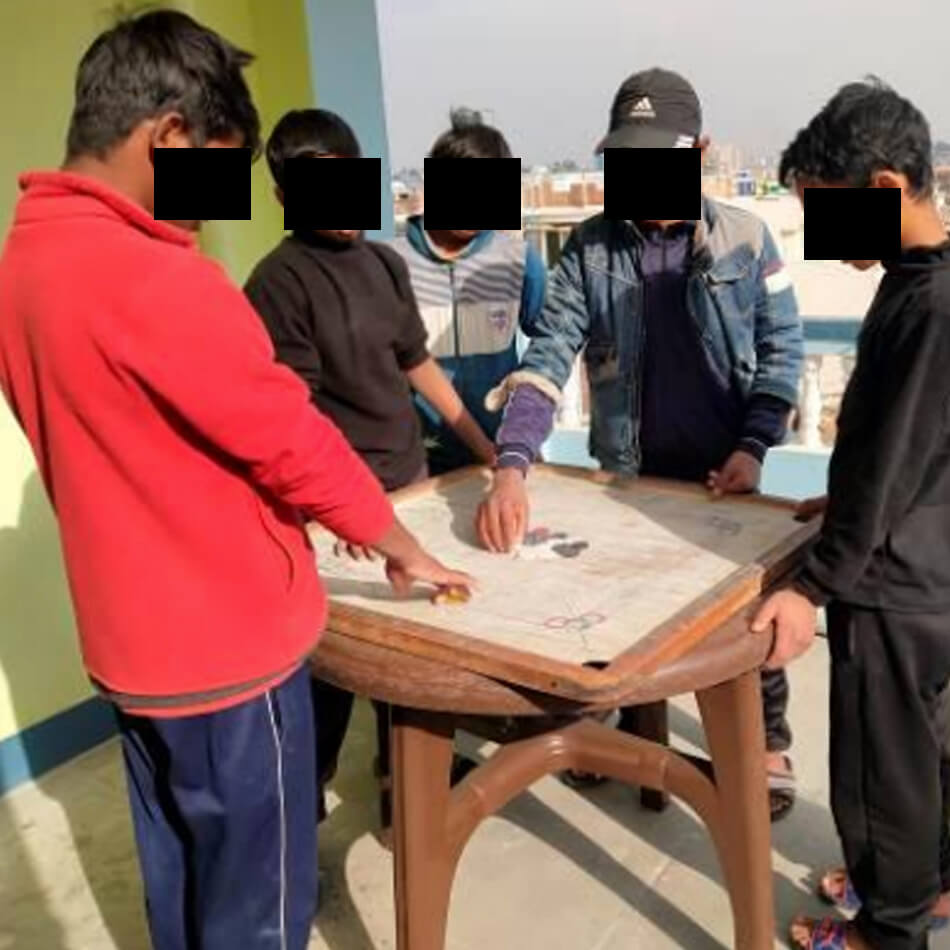 Reintegrating children after rescue in their family/extended family and community is a very challenging process. At the same time, it is a very important part of a post-rescue activity. CRN believes children should not be separated from their family and long-term care is a last resort for them.

We successfully reintegrated four boys during this period, and we are pleased to report that we have connected 8 children with their families and have begun communication. Now, we are tracing the families of three additional children who were recently rescued. All connected family members were very happy and thankful to CRN for rescuing their children and keeping them safe at the Transit Home. We will carry out detailed assessments by going to the villages of all the children who are in our Transit Home and will also do monitoring visits for the children that have been reintegrated in the coming quarter. 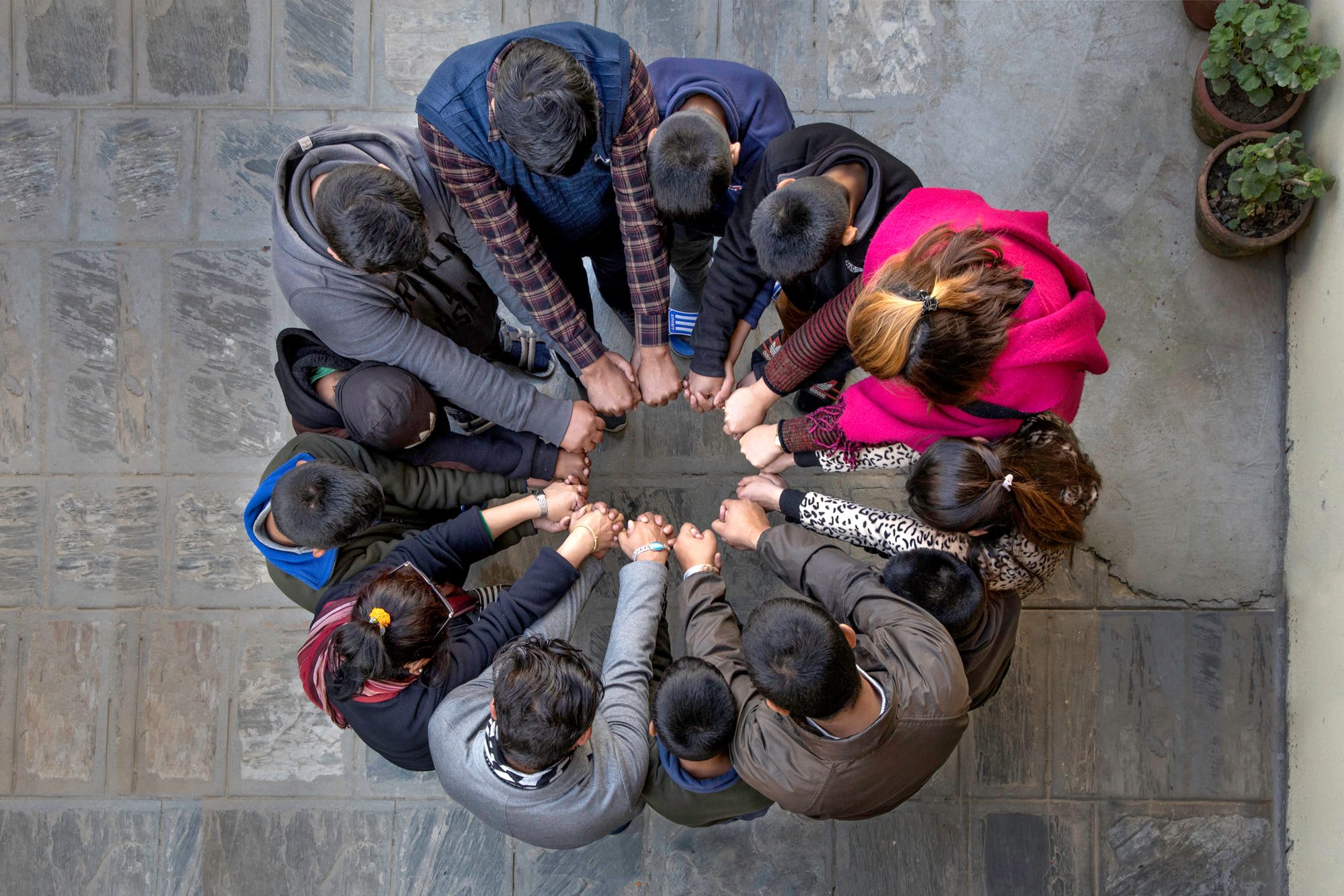 (All names have been changed to protect the privacy of rescued children.)

Sajit is the sixth child of his parents and altogether there are nine members in his family. The family has a small piece of land and the yields from it hardly meet the family’s daily needs. There are many cases where children are being trafficked by their relatives or neighbors, but Sajit was trafficked to India by his father.

Sajit’s father took Sajit to India to work in a bag factory. His father took the money from the factory owner and returned to Nepal. Sajit did not know how much money the owner paid to his father. Sajit worked in that factory for more than one year but did not get any money. He had to work for 14 hours each day stitching and cutting clothes for bags. As per Sajit, he had to share a small room with six other boys and there was no proper ventilation. The owner used to provide very little food and clothes to wear. Sajit says he was severely beaten by his owners many times while not doing things properly. It was a very unbearable situation for him so one day he escaped. He strolled in the streets for a couple of days and one day a good man took him to the police station from where he was taken to a care home located near Mori Gate in New Delhi. He stayed in the children’s home in India for about a year.

He said he was very happy when Nepalese people came to take him home. After long hours of travel, he reached the CRN Transit Home. He is a very soft-spoken boy, who shares, “I am very happy to be here and enjoying my life.” In a short period, he mixed well with the other children in the Transit Home. He is not feeling lonely and so far away from home now.

Sajit is in our Transit Home and getting his childhood back. He is in the socialization period and we are providing him with all the necessary support to overcome his emotional traumas. In the meantime, we have made initial contact with Sajit’s family and they are very happy to know that he is safe.

It is estimated that there are nearly 100,000 children trapped in forced labor in Nepal –  typically working 15+ hour days in hazardous, deplorable conditions, with limited food, no protective gear, and often without pay. In addition, the trafficked children often suffer from physical, emotional and sexual abuse. Child Rescue Nepal (CRN) was created to counteract this extremely dark industry and fight for the rights and futures of all children in Nepal.

The courageous CRN team works tirelessly to rescue trafficked children, provide them with extensive counseling and rehabilitation services, and when possible and safe, reunify and reintegrate them with their families. Not only is CRN on the frontlines rescuing children, but they are also actively working to prevent the high prevalence of trafficking by increasing children’s access to education. With 40% of Nepal’s population under the age of 18, CRN knows the best way to create a path for future development is to prioritize both the protection and education of children.

You can support the work happening on the frontlines at CRN today with a donation of any amount.