GoPhilanthropic donor Cathleen Burnham’s reflections and images on her time with GoPhil partners Maji Moto and the Entikeng Lepa school in Kenya.
“My father had already received the three cows for me.”
“My father was very happy because the old man brought the cows.”
“I was traded to a man about forty when I was a little girl.”
“I was traded to an old man about sixty years when I was a young girl.”
The girls’ stories open with these words.  They sit in wooden chairs, in soft lavender school uniforms and with shaved heads or tidy corn rows.  They speak quietly but with confidence, unflinching as they talk about frightening solo flights across the wilderness, angry fathers chasing and mothers rejecting. Of starting over at the ripe old ages of six or nine or twelve. The girls run to escape female genital mutilation and childhood marriages, but they drive back so much more:  poverty, dawn-to-dusk labor and the lack of basic human rights that is the lot of a traditional Masai woman.
Now the girls cannot go home.  Their bride price had to be returned angering their fathers.  So they live at school. Enkiteng Lepa School is in the middle of pastoral Masai Land, much of its population living in traditional mud huts.  The occasional settlement with a tiny store, home-grown bar or government school can be seen, but it’s mostly a land of low acacia, gently sloped hills, flowing red shukas, cows and goats and their accompanying jingling bells.  Then, all of a sudden there is a tall, manicured hedge and a pink metal gate. Within the school grounds is a long, modern building housing several classrooms for the 190 students, largely girls, but 48 of them boys, from pre-school to eighth grade.  Inside one classroom posters line the walls listing irregular verbs, global warming facts.  Children yell teacher Ben Gibson’s name, arms either straining toward him or shaking enough to throw out an elbow, begging to be called on.  Mr. Gibson is patient and speaks gently.  The children’s enthusiasm, happiness and interest in their subject (Swahili) can only be called rare.
Life As a Traditional Masai Girl
Some people equate offering western style education to Africans with forcing religion and believe we should leave well enough alone.  But FGM and childhood marriage deny a woman her basic human rights:  the right to control her body, the right to choose whom and when to marry, the right to express an opinion, the right to pursue a calling. A Masaii girl bears children as a young teen and her days are a round of constant work.  She tends to her own family and her in-laws. She rises early to milk cows and goats, prepares all meals, washes both families’ clothes, walks miles to fetch water and firewood and cleans both houses.  She looks after the injured or very young creatures at home, cutting grass and giving water. She builds her house and mixes water and cow dung to seal the holes in both houses. The man gives orders.  He directs the children to take the cows for grazing, and the women in their work.  If a Masai woman does not obey her husband, she can expect to be beaten.  Masai women are trapped by motherhood before they’re old enough to think beyond their parents’ wishes.  A Masai woman commonly dies in what is considered middle age in the west.
Childhood Marriage

Girls are promised in marriage as early as the womb in a process called “booking”.  Families of girls are eager to reserve a husband for their daughters.  Girls are seen as a way to increase wealth through bride price.  Little girls are sometimes married to older men as the fourth or fifth wife.  When a young girl is married to an old man, she is more likely to become a widow with children to care for while still in her teens, and she is not allowed to remarry.  She retains her late husband’s cows, but has no way to graze them if there is a drought and so must sell them. Once they are gone she has nothing.
What is FGM?


Female genital mutilation is the practice where a woman’s genitals are removed in order to prevent promiscuity by lessening a woman’s interest in sex, or the vagina is sewn closed rendering her incapable of intercourse.  FGM can lead to infections including HIV, bleeding to death, painful sex, disinterest in sex, and dangerous childbirth.  FGM puts women at risk of ostracism because cutting often results in incontinence causing a woman to reek of urine.  FGM is often performed when girls are five years old.
In Kenya, Masai girls are valued for the cows their bride price brings. Enkiteng Lepa School provides girls with the eternal cow.

At Enkiteng Lepa School girls are taught to soar over this future. At the heart of this nascent women’s movement is Hellen Nkuraiya.  The school’s founder and girls’ savior, she rescued many of the girls herself.  She protects the aspects of Masai culture beautiful for all while excoriating its brutal practices and providing the girls their right to an education so they can glide easily within the Masai world and modern Kenya. Mondays and Fridays are school uniform days.  The rest of the week the girls, and Hellen, wear traditional Masaii clothing.  They sing and dance pieces from both worlds, learn proper Maa, Kiswahili and English.  They practice sustainable agriculture and learn about global warming. There are lessons in avoiding stress and HIV.  And, by the way, Enkiteng Lepa is doing a spectacular job.  So spectacular, this school run on donations for rescued girls is now taking in paying students. Paying boy Masai students.

So, instead of a life of servitude where expressing an opinion is often met with a blow, these girls will go on to high school and possibly university.  They will have fewer children and their children will be healthier.  They will earn money and studies show most of that money will go back into their villages and families.  They will avoid the violence toward women accepted in Masai culture.  The girls will direct their futures, not a father or a husband.
Oasis in the Middle of Hot Water 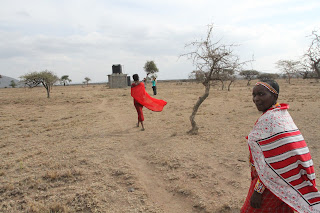 It’s fitting Hellen chose to build her school in Maji Moto.  Maji Moto means hot water and is named for the hot spring in the area.  Hot water is exactly where Hellen has chosen to put herself since she graduated from teaching college.  Herself a victim of cutting, she became the fifth wife of an older man when she was a young girl.  She’s not sure her age.  “My mother would say, ‘You were born in the year of heavy rain,” said Helen, scrunching her shoulders and tipping palms skyward in the universal gesture of “What does that mean?”  The heavy rains may have occurred fifty years ago or thirty-five.  A nun spirited her away from her husband and her father was briefly arrested.  The nun saw to it that Hellen was educated and independent.  Hellen became a teacher and was fired from school after school as she spoke to girls about rejecting FGM and early marriage.  “I was beaten with sticks by parents.  They would say, ‘Why don’t you have your own children so you can control them?’” But, she did not stop.  She believes the way out of poverty and subjugation is through education.  She says if Masai count wealth in cows, a girl’s education is worth an infinite number of cows. 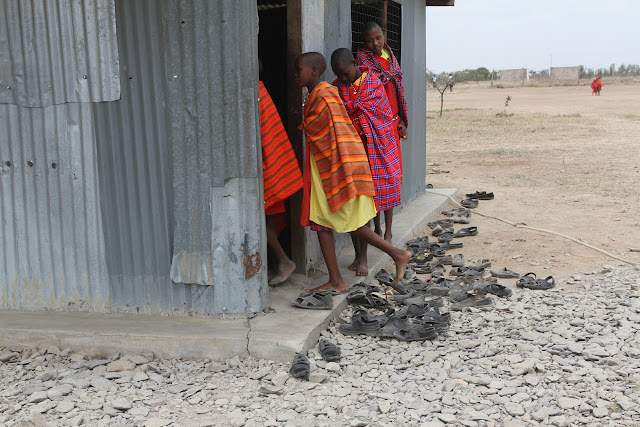 Twice per term parents are invited to visit at Enkiteng Lepa School.  They come bearing milk in calabashes, food cooked at home and they stay until mid-afternoon.  Then they go home, leaving the girls.  Is a little girl better off with other students and teachers, but no mother or father, siblings or extended family? Perhaps not.  But, this is the start of a movement.  While the girls are without family during childhood, they will emerge into adulthoods of self-determination.
“I want to be an aviator.”
“I want to be an optometrist.”
“I want to be a lawyer.”
“I want to be like Hellen.”
These are the words the little girls used to tie up their stories.